This is the first, in a multi-part series on using Windows Server 2008 as your development O/S, and utilizing the recently released Hyper-V functionality to ease SharePoint 2007 development.  Here I'll cover getting the new Hyper-V running, and in the next part, I'll cover SharePoint installation, and how you can (hopefully) benefit from Server 2008.

There are numerous reasons to run Windows Server 2008 on your development PC.  Here were the selling points for me:

First, Make sure you have supported hardware:

You must be on an x64 based machine, with a CPU that supports hardware virtualization.  Most of the Intel Core 2 Duo's seem to, as well as AMD's AMD-V line.

Most machines appear to ship with the CPU hardware virtualization support disabled in the BIOS.  On my Thinkpad I found the settings under Config->CPU.  Also, after you change this setting you must POWER OFF your machine and turn it back on.  Simply resetting the machine does not appear to let the CPU change modes.

How to Setup Hyper-V

Throughout this process, you'll be rebooting so often that you'll feel like you are running Windows 95.  I'll try to streamline things from my experience to save you some time.

From this point forward, assumes you have installed Windows Server 2008 x64 on your hardware, but not yet configured it.

Go download the RTM update to bring your Hyper-V to the final release.  (2008 shipped with a pre-release version)

Once the update is installed, you'll need to restart, and Windows will perform some reconfigurations at both shutdown and startup.

Once you are back, Server Manager should open, if not go ahead and launch it.

In Server Manager,  at the top level, under the Roles Summary you currently may not have much of anything. 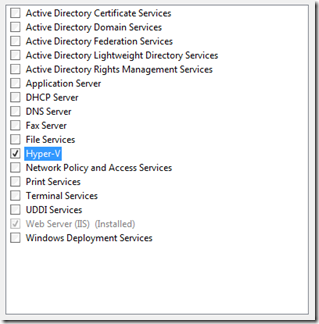 Follow through the wizard.  The only important thing you'll need to choose is some information around network adapters.

The role is now added, but isn't enabled or available.  Go ahead and restart.

After some major reconfigurations, you'll be back, and you'll see Hyper-V in your Roles Summary.

If you've ensured your CPU virtualization support was enabled in the BIOS, you can now expand the Hyper-V manager from the Server Manager tree, and right click to â€œConnect To Serverâ€ 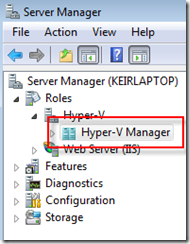 Go ahead and connect to localhost. 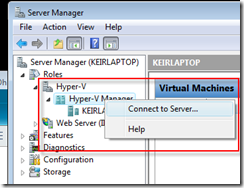 Now when you click your server name, you'll get an actions menu on the right, and you can click â€œNewâ€ to create a new machine. 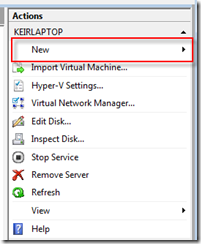 There is a very nice wizard for setting up your virtual machine.  (Alternatively, you could have attached a preexisting one).

Take note of the installation options section, where you can choose an ISO to install the OS from.  I installed Server 2008 Standard on my first virtual machine, as it is virtualization â€˜aware', and performs very well.  I will later create one for Server 2003 as well, to test on multiple environments.

Make sure you get enough memory allocated! 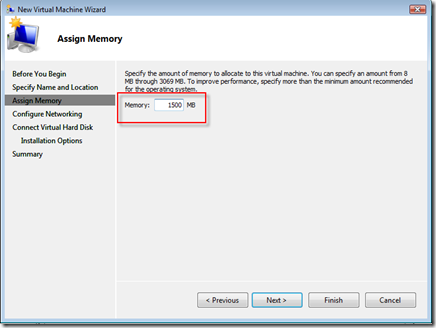 Once you've created it you can go ahead and start it: 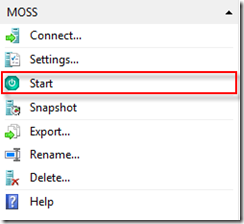 And There she is! 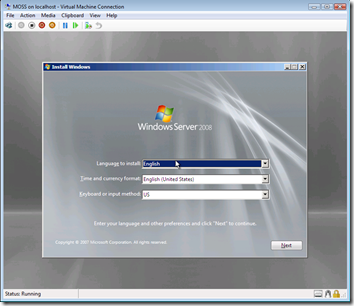 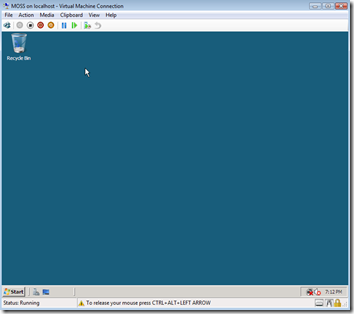 In the next part, I will discuss installing SharePoint on our Server 2008 virtualized machine, as well as the resulting development workflow.